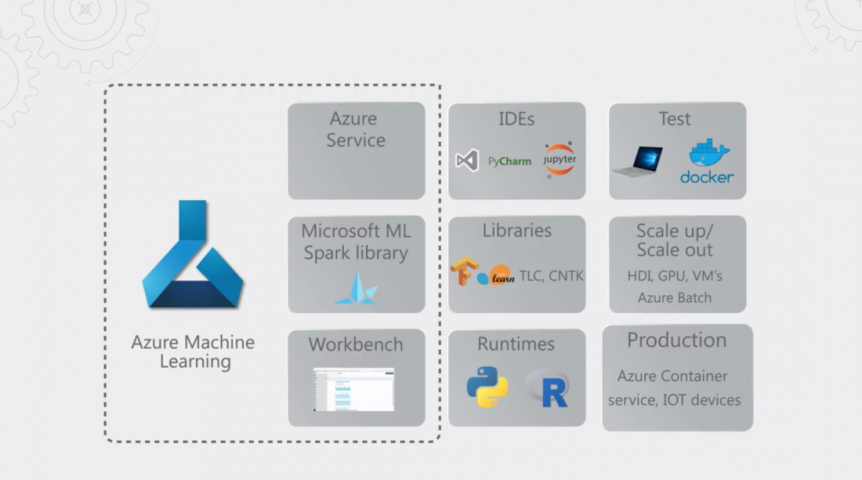 This tutorial will walk users through building a classification model in Azure Machine Learning by using the same process as a traditional data mining framework. We will use the public Titanic dataset for this tutorial. From the dataset, we can build a predictive model that will correctly classify whether you will live or die based upon a passenger’s demographic features and circumstances.

The Titanic dataset is one of the few datasets that is good for both beginners and experts because its complexity scales up with feature engineering. There are numerous public resources to obtain the Titanic dataset, however, the most complete (and clean) version of the data can be obtained from Kaggle, specifically their “train” data.

The train Titanic data has 891 rows, each one pertaining to an passenger on the RMS Titanic on the night of its disaster. The dataset also has 12 columns that each record an attribute about each occupant’s circumstances and demographics: user ID, passenger class, age, gender, name, number of siblings and spouses aboard, number of parents and children aboard, fare price, ticket number, cabin number, their port of embarkation, and whether they survived the ordeal or not.

For additional reading, a repository of biographies pertaining to everyone aboard the RMS Titanic can be found here (complete with pictures).

Begin by identifying columns that add little-to-no value for predictive modeling. These columns will be dropped.

The first, most obvious candidate to be dropped is PassengerID. No information was provided to us as to how these keys were derived. Therefore, the keys could have been completely random and may add false correlations or noise to our model.

The second candidate for removal is the passenger Name column. Normally, names can be used to derive missing values of gender, but the gender column holds no empty values. Thus this column is of no use to us, unless we use it to engineer another name column.

The third candidate for removal will be the Ticket column, which represents the ticket serial ID. Much like PassengerID, information is not readily available as to how these ticket strings were derived. Advanced users may dig into historical documents to investigate how the travel agencies set up their ticket names, perform a clustering analysis, or bin the ticket values. Those techniques are out of the scope of this experiment.

The last candidate to be dropped will be Cabin, which is the cabin number where the passenger stayed. Although this column may hold value when binned, there are 147 missing values in this column (~21% of the data). Advanced users may cluster the cabins by letters, or can dig down into the grit of the actual RMS Titanic ship schematics to derive useful features such as cabin distance from hull breach or average elevation from sea level.

Now that the dropped columns have been chosen, drag in the “Project Columns” module to drop PassengerID, Name, Cabin, and Ticket.

We must now define which values are non-continuous by casting them as categorical. Mathematical approaches for continuous and non-continuous values differ greatly. For example, if we graph the “Survived” column now, it would look funny because it would try to account for the range in between “0” and “1”. However, being partially alive in this case would be absurd. Categorical values are looked at independent of one another as “choices” or “options” rather than as a numeric range.

For a quick (but not exhaustive) exercise to see if something should be categorical, simply ask, “Would a decimal interval for this value make sense?”

From this exercise, the columns that should be cast as categorical are: Survived, Pclass, Sex, and Embarked. The trickiest of these to determine might have been Pclass because it’s a numerical value that goes from 1 to 3. However, it does not really make sense to have a 2.5 Class between second class and third class. Also, the relationship or “distance” between each interval of PClass is not explicit.

To cast these columns, drag in the metadata editor. Specify the columns to be cast, then change the “Categorical” parameter to “Make categorical.”

Most algorithms are unable to account for missing values and some treat it inconsistently from others. To address this, we must make sure our dataset contains no missing, “null,” or “NA” values. There are many ways to address missing values. We will cover three: replacement, exclusion, and deletion.

We used exclusion already when we made a conscious decision not to use “Cabin” attributes by dropping the column entirely.

Replacement is the most versatile and preferred method because it allows us to keep our data. It also minimizes collateral damage to other columns as a result of one cell’s bad behavior. In replacement, numerical values can easily be replaced with statistical values such as mean, median, or mode. The median is usually preferred for machine learning because it preserves the distribution of the data and is less affected by outliers. However, the median will skew and overload your frequencies, meaning it’ll mess with your bar graph but not your box plot.

We will cover deletion later in this section.

Looking at the metadata of “Age” reveals that it is a “numeric” type. As such, we can easily replace all missing values of age with the median. In this case, each missing value will be replaced with “28.”

Embarked is a bit trickier since it is a categorical string. Usually the holes in categorical columns can be filled with a placeholder value. In this case, there are only 2 missing values so it would may not make much sense to add another categorical value to “Embarked” in the form of S, C, Q, or U (for unknown) just to accommodate 2 rows. We can stand to lose 0.2% of our data by simply dropping these rows. This is an example of deletion.

We must now directly tell Azure ML which attribute we want our algorithm to train to predict by casting that attribute as a “label.” Do this by dragging in a metadata editor. Use the column selector to specify “Survived” and change the “Fields” parameter to “Labels.” A dataset can only have 1 label at a time for this to work. Our model is now ready for machine learning!

It is extremely important to randomly partition your data prior to training an algorithm to test the validity and performance of your model. A predictive model is worthless to us if it can only accurately predict known values. Withhold data represents data that the model never saw when it was training its algorithm. This will allow you to score the performance of your model later to evaluate how well the model can predict future or unknown values.

Drag in a “Split” module. It is usually industry practice to set a 70/30 split. To do this, set “fraction of rows in the first output dataset” to be 0.7. 70% of the data will be randomly shuffled into the left output node, while the remaining 30% will be shuffled into the right output node.

First, we must identify what kind of machine learning problem this is: classification, regression, clustering, etc. Since the response class is a categorical value, or “0” or “1”, for survived or deceased, we can tell that it is a classification problem. Specifically, we can tell that it is a two-class, or binary, classification problem because there are only two possible results: survived or deceased. Luckily, Azure ML ships with many two-class classification algorithms. Without going into algorithm-specific implementations, this problem lends itself well to decision forest and decision tree because the predictor classes are both numeric and categorical. Pick one algorithm (any two-class algorithm will work).

If you visualize your “Evaluate Model” module after running your model, you see a staggering amount of metrics. Each machine learning problem will have its own unique goals, thus having different priorities when evaluating “good” or “bad” performance. As a result, each problem will also optimize different metrics.

For our experiment, we chose to maximize the RoC AuC because this is a low risk situation where the outcomes of false negatives or false positives do not have different weights.

RoC AuCs will vary slightly because of the randomized split. The default parameters of our two-class boosted decision tree yielded a RoC AuC of 0.817. This is a fair performing model. By fine-tuning the parameters, we can further increase the performance of the model.

Both models performed fairly (~0.81 RoC AuC each). The boosted decision tree got a slightly higher RoC AuC overall, but the two models were close enough to be considered tied in terms of performance. As a tiebreaker, we can look at other metrics such as accuracy, precision, and recall. Using those metrics, we found that the boosted decision tree had lower accuracy, precision, and recall when compared to the two-class decision forest. If we were to select a winning model right now, it would probably be the two-class decision forest.